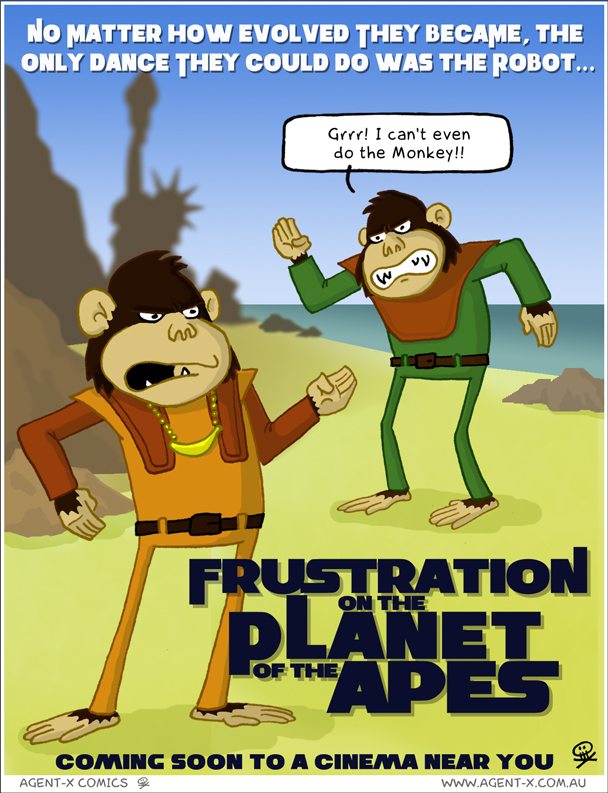 I recently saw “Rise of the Planet of the Apes”, which I thought was excellent.
However, I did not see any apes dancing in this movie. Nor do I recall them dancing in the original films.
I guess now we know why .

I loved the new film and as a fan of the original movies, I was pleasantly surprised to see this film lived up to the hype.
Other fans of the Apes movies will surely have enjoyed spotting the nods to the originals, which were placed in it.

I noted:
–  a cameo by Charlton Heston on a TV screen
–  reference to Dr Zaius. (the orangutan was named Maurice, an obvious nod to actor Maurice Evans who played Dr. Zeus)
– a few classic lines being used. (eg: “Get your stinking paws off me, you damned dirty ape”)
– the tv news &  newspaper headlines that hint at the space mission that has gone missing
– Caesar  working on a puzzle of the Statue of Liberty
– a female chimp named Cornelia (reference to Roddy McDowell’s original role of Cornelius)
– Caesar’smother is named “Bright Eyes” (the nickname that Dr. Zira gave to George Taylor (Charlton Heston) in the original movie)
– Apes riding horses
– The name of the teenage guy at the Ape refuge is Dodge Landon. (“Dodge” and “Landon” were the last names of Taylor’s two surviving shipmates, in the original movie)
– Dodge Landon sprays Caesar with a fire hose. (An ape sprayed Taylor with a firehose in the original movie)

Did I miss any references?