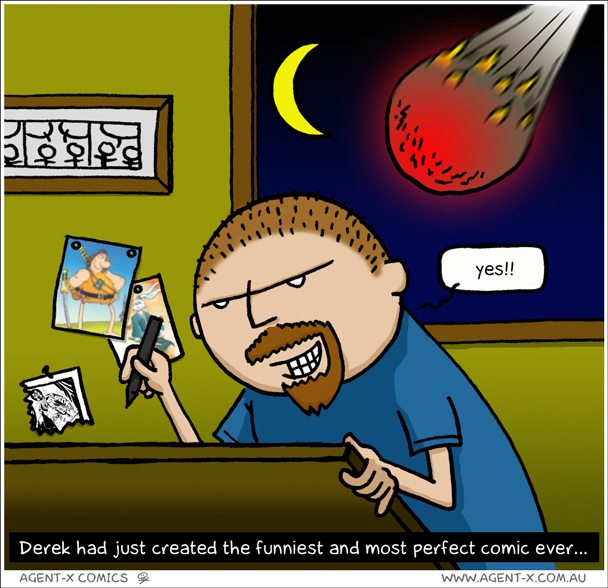 This is the most perfect comic ever created!

It’s a shame we will never see it….
But that is OK, because there will never be a perfect comic.

Comic Art is like any other form of art, in as much as it is subjective to the viewer and their personal preferences.
There are so many artistic styles active within the comics world that a single style will never be the one that meet with the approval of all people who view it.

Some people prefer highly stylised images, whilst others want a more photo-realistic version given to them to indulge in.

But the one thing that I think CAN be a common thread throughout all comics, regardless of popularity, the style in which they are created or even the medium they appear – and that is that they should be created by artists who enjoy what they are doing.

Too often in the comics world, artists will clash over the smallest things (often just due to a mis-interpretation of what may have been implied) and full on melee will erupt between two parties. Very often, in these cases, sides are taken and many more artists pop-up, just to throw their hats into the ring and be seen to be part of it all.
Pros and cons of the medium in which a comic is presented, will be debated vigorously.
Egos will be inflated and former glories will be held high as proof that that party is the correct one in the current debate.
And names are always called.

When I see this occurring, I cringe.
I want to just say out loud “can’t you just do what you do and love what you do?”

Not everyone wants to be a pioneer.
Not every comic artist will make a living from their passion.
No one medium is the ultimate and best one to use.
No one knows it all – there is always more to experience.

@ryanstegman posted on twitter recently, a great piece of advice to the newer artists out there – “STAY POSITIVE. There is no conspiracy against you breaking in! Work hard and make your own luck.”

The fact that there is even a perception of a “conspiracy” that newer artists have no hope in breaking into comics and achieving what they want to, is too much for me.
All this fighting and bragging can actually dissuade some upcoming artists from trying, which may then deprive us of some fantastic comic art in the future!

Those who have “made it” in the comics world should be setting examples of how to behave as a professional, as well as portraying what a unified and sharing community the Comics world actually is.
Too often though, they spend their time baiting others just because they can, or defending their own techniques or methods.

I would love to see 2010 be the year that the comics community worldwide, takes a step back and lets little comments roll off their back. Raise thos tolerance levels and become the “bigger man”
Ignore that ridiculous post.
Refrain from commenting, especially when you know the shit-storm it may create.
Let that twitter comment wash away in the tweet stream.

Let’s just remember that we are not journalists or politicians.
Our work should speak for us. Not the other way around.

Overall, I feel that comics creation should stem from of a love for creating comics and drawing – nothing else.
We do what we personally feel is right for our art.
The rest is just gravy.