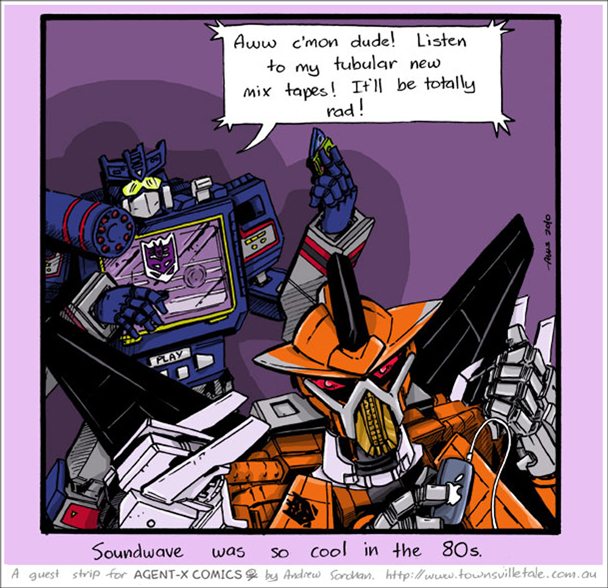 Andrew creates a strip that I really enjoy. I like the story lines he comes up with (and the moustaches), and I can really relate to the local flavour of the site as I have been to Townsville many times.
(little known fact – I was born in Rockhampton, Australia, which makes me a Central Queensland boy just like Andrew.)

Anyway, enough from me. Here is what Andrew wrote to go with this comic:

Oh my god, what’s this?
This isn’t the work of the incredible Agent-X… who could this be?
It’s me! Andrew Sorohan, the writer and author of “A Townsville Fairytale“.
I also draw and illustrate that (illustrious) cartoon. Why don’t you check it out?

So what is this?
This is me being a little bit bored. I wanted something different to draw than my usual moustachio’d dudes, and at the same time I was going through Agent-X’s page to catch up on his strip (turned out that involved reading the latest strip, since I was more caught up than I thought).
So, after a quick Twitter exchange (and shame on you if you’re not following both Agent-X and myself, @TownsvilleTale on Twitter) I threw together this little ditty.

What does it all mean?
Well, anyone who knows me knows that I’m a massive Transformers dork. And anyone who knows Transformers knows that in the 80’s Soundwave was the single coolest Transformer out there. Unfortunately literally everything that made him awesome is now insanely dated.
Everything.
He changes into a cassette player, he has a host of cassette-tape minions. Even the fact that his weapons turn into his tape player mode’s batteries is dated because people don’t use Duracells in their portable equipment nearly as much any more.
Even Soundwave’s awesome voice is dated — with the heavy synthetic recoding sounding very very 80’s nowadays.

Repeated attempts have been made to update the poor guy over the years, but Soundwave has just never really recaptured his spot at the top since then. In fact he recently lost out to a Beast Wars character for his place Hasbro’s official Transformers Hall of Fame. Ouch.

Oh, and just so you know, the guy in the foreground is the 2010 toy release Terradive, an incredibly awesome new jet Transformer.

(Plus I included an iPod so that it’d be more like an Agent X strip, what with his being up on modern technology jargonyness…
Man, sometimes I feel like I’m just like Soundwave.)