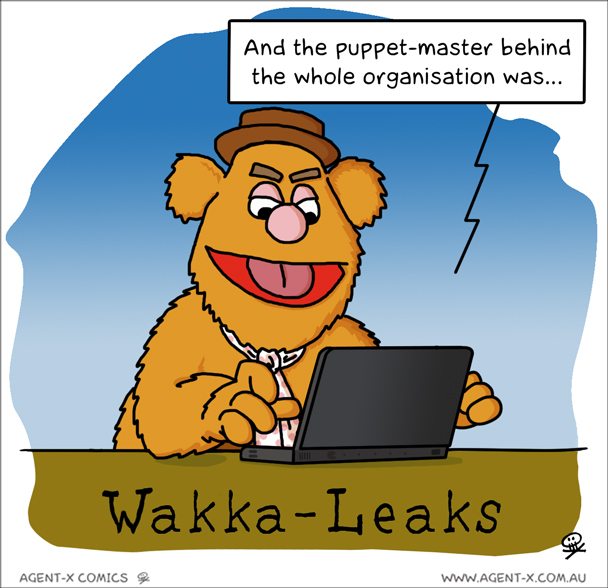 Don’t listen to this guy.  He is such a muppet.

A lot of people have jumped onto the WikiLeaks bandwagon recently which inspired me to create and share this comic.
There is a lot of differing opinion on WikiLeaks,  both positive and negative. It is such a polarising media event, that the word”WikiLeaks” hasnow entered into the common  usage in everyday language.
That is pretty hard to do.

Personally, I support WikiLeaks. The site and what it stands for.
Not Julian Assange.
I can make a very clear distinction between the two, which (unfortunately) many others cannot do.
Julian has become part of the equation,which I feel gives the non-supporters more ammunition to work with, in order to bring down WikiLeaks.
This is not right, in my opinion,  as I feel that the information released through the site is vital in this day and age.
The public should be kept informed about the decisions and deals that our government,or the military, make on our behalf.

If WikiLeaks is ever shutdown or banned, it will be a great shame.
But I take comfort in knowing that if the death of WikiLeaks occurred, numerous smaller sites would pop-up right away, to fill the void.

After all, the internet is the “information superhighway” and the Truth should always be out there.