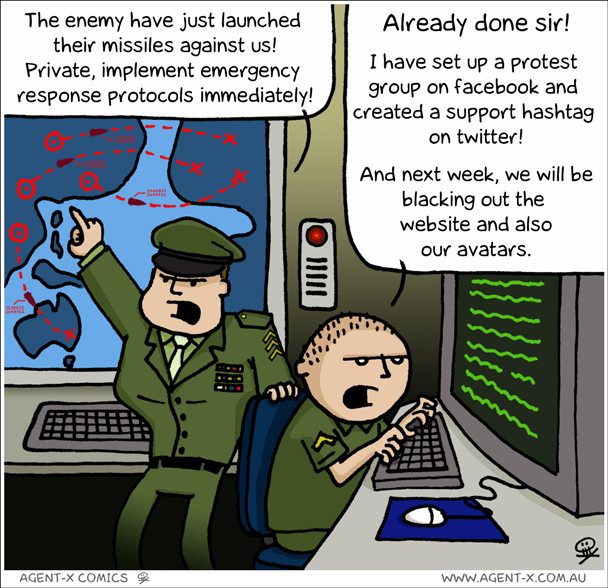 Letting the internet make you appear like you care.

Slacktivism (also written as slactivism) is a combination of the words Slacker and Activism. The word describes “feel-good” measures in support of an issue or social cause, that have little or no practical effect other than to make the person doing it feel satisfaction. The acts also tend to require little personal effort from the slacktivist and are mainly online activities.

There are examples of slacktivism all over the internet, and once you become aware of the term they tend to be frustratingly easy to spot.
I use the word ‘frustrating’ here, as in my experience, I find that the biggest slacktivists are also the ones that tend to tell you about it as many times as possible.
It is the “look at me and how much I am doing to help, aren’t I great?” scenario.

Those who participate in “slacktivist” campaigns, relish in an illusion of having a meaningful impact on the world without demanding anything more than joining a Facebook group or changing your Twitter avatar to show a colour or a badge.

Recent examples of this include:

– adding your bra colour to Facebook to highlight breast cancer.
– making your twitter avatar green to support Iran
– blacking out your avatar to support anti-internet censorship
Even “Earth Hour” protests against non-government action against climate change has elements of slacktivism.

It is unfair to label ALL online activity as Slactivism, or indeed, to dismiss Slacktivism as totally useless.
There are situations where online activity & awareness has assisted in producing results.

My issue with all this is when I see people jump on the latest bandwagon, promote their activity to all their followers, but then promptly return to playing Farmville, or asking the lazyweb for recommendations on products.

Also, many people participate without actually understanding the issues involved.
I am sure you can all find someone who updated their Facebook status to their bra colour without realising what it was actually for.
I even know some men that did it, as it was just the latest meme going and they wanted to appear that they were part of it all.

Online protest or awareness campaigns do have merit and can help cause the desired effect. Even so, it is important to decide if the online medium is the right audience for the issues.

An example of this is the current Anti-Internet censorship filter campaign going on in Australia.
The participants in this are very active & are giving it a good go, which I applaud them for. They are standing up for what they believe in.

However, there is the chance this campaign may fail and I am not the only one who thinks so.
The campaign is being conducted online, and uses mechanisms that promote Slacktivist activities, in a negative way.
For example, this article “Why the anti-filter campaign is failing” supports this view.
It also raises one point that I personally feel is relevant. The article suggests that this campaign needs to target “the mass of reasonably-minded, moderate, everyday Australian voters that are needed to effectively influence the process.”

This means that having the campaign conducted ONLINE via Facebook, twitter, etc, where it targets supporters already aware of the issues involved, is somewhat wasted (ie: “preaching to the converted”).
The funny thing is that the ‘Stop Internet Censorship’ website states, as part of their Critical components of a campaign methods, that they should

“Target the audience that matters [Don’t preach to the converted]”:   (found here)

As well, these same components state:

I believe that to have any chance to succeed, the message needs to get offline and into print, radio or television to target the irregular internet users and influence their votes.
And I really WANT the campaign to succeed in every way possible.

But, at present, it comes across as just a big slacktivist group hug, after which everyone who did nothing more than black out their avatar and re-tweet some links & hashtags, will be the first to angrily tweet “We tried so hard! How could we have done any more?”

Well, the answer is easy and applies to any campaign. JUST DO MORE.
I would prefer to see those involved in any campaign, not matter what it is, actually trying to do something positive to compliment there online activities.

– Make a donation to the cause they want to support.
– Use all relevant types of media to support it.
– Write a letter to their relevant politician.
– Make a PERMANENT change to their daily activities or way of life, which helps the issue.
– Advise others of actual support mechanisms to help the cause.
– Take part in activites for the cause, which are online AND offline.

Now, do not misunderstand me here. I believe in the great and powerful beast that is the Internet, and I feel it should be harnessed and used where ever possible to change our lives for the better.

It is far too easy to sit back, click a link and think you have made a difference.
Next time you decide to support a cause, why not take a moment to think about what you are doing and determine if your activities will actually help?
Decide if you REALLY want to support the cause and effect change. Or is it all just for show?

Note: The point of this blog post is to make you think about how you involve yourself in change causing actions.
If you would like to add a rant in the comments below, then by all means, please go ahead.
What I would prefer, is that you get out there, do something of real value and prove me wrong.
Nothing would make me happier than to be proven incorrect, especially about the fight to stop internet censorship.
If you are an Australian, instead of a comment, why not go to http://www.stopinternetcensorship.org and find out ways to help support the cause.

Oh…I love this term. I might have to do something with it too.

It’s funny ’cause it’s true! 😛 But for real, as if our generation and those younger needed another excuse to not move.

I love that term. I agree with your wholeheartedly and wish people would actually do something instead of just adding some dumb colour wash to their twitter picture. or making some dumb arsed status update on facebook HOW DOES THAT HELP ANYONE OR ANYTHING???

This is why I chose not to join the local anti internet filter group. The most vocal members do no more than draw pretty pictures for people to post on their websites and argue about what they should be called.

Instead I am finding a few like minded souls and taking some action in ways that I feel actually have some impact.

I’ve noticed on other issues that I’m passionate about that there is a lot of time spent doodling pretty pictures to post on one’s Twitter and Tumblr, or building a pretty blog that they then never post to again.

However, that said, I do think Facebook is an EXCELLENT media to get people talking about a topic, only not in a “post your bra colour” way. By posting articles on topics I’m passionate about, changing my avatar to something noticeable or generally just using my status as a soapbox, I get a whole swathe of people who’s only contact with the internet is Facebook and email. The late adopters are those we need to be working on. Even the slowest of late adopters have hit up FB now!

Thanks for the feedback Kath.

I appreciate you adding this comment, as I know you were involved in the meetings for the local anti-internet filter group. As well, I understand that you actually took the time to write to your local member of parliament about the issue.
That is exactly what I was writing about here – You took the next step and made a choice to do something to actually try and help the cause.
Good on you.

I am sending you a gold star in the mail!!

Letting the internet make you appear like you care….