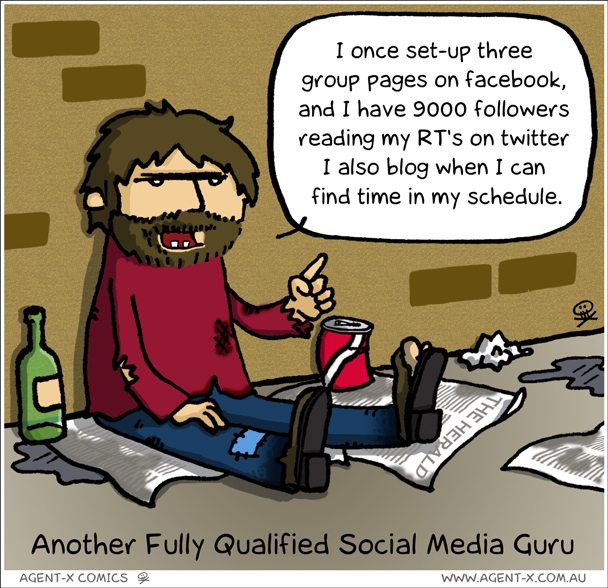 G-U-R-U is the new way to spell “Clueless”

Everyone has heard all about the huge amounts of people self-proclaiming themselves as “Social Media Gurus” over the past few years.
And I bet everyone has met one of these people in real life too.

Almost without exception, these “gurus” are clueless, unimpressive self-promoters who have grabbed on to the latest thing that they think will get them some attention, respect and acclaim.
So many people added this title to their twitter profiles, in 2009, that it became hard to find someone without the word “guru”.
This fairly recent post from BL Ochman talks about the number of people still doing this. You can go to tweepsearch.com and confirm this for yourself too.

It is all so sad and it has created a situation that the word “guru” has lost the reverence that it once had.
The definition of the word shows it was once an honorable title. But no longer. It now draws ridicule, mistrust and scorn in the western world and online.

The odd thing is that a majority of these so called “gurus” have chosen this title for themselves.
This is the reason it has lost it’s former meaning, as the title is one that needs to be placed on you by others, who value your worth and the contribution you can make.

Because these titles were self-bestowed, the wielders of this awesome new rank often made some fantastically stupid mistakes due to their own lack of knowledge. For a great list of some of these, check out this post from mashable

Thankfully, rise of the social media gurus seems to have reached its peak, because there’s a new, contrary, position gaining momentum. It’s the “who the hell are these people to call themselves experts” movement. Posts like this one and this reflect that sentiment.

But the term is forever tarnished, in my opinion.
That’s OK though, because I like the word “sensei” better anyway.

I am also lurking on the internet in places other than here. (and in a VERY non-guru kind of way).
You can check out these places:

Of course people can’t just go around using the term Sensei either, and should never use it incorrectly. I don’t call myself a Sensei, because I am not a teacher (actually, I forgot, I am teaching one class a week and my be teaching more next term, never mind, I guess I am a Sensei). See, Sensei is Japanese for teacher, not master, not martial arts instructor, just teacher.

@Traverse Davies – it’s very telling that the title of ‘teacher’ retains reverence in many cultures outside North America and Europe – sensei, guru, hoca (Turkish), ustadh (Arabic). Such an essential calling, so diminished by our industrialized education systems.

Yet another way that Web (n ≥ 2).0 turns out to be the same as the web was in the 90s. Remember how “web gurus” made “guru” a subtle insult back then?

[…] This is a winner! Self Proclaimed Social Media Gurus By lamontprice via agent-x.com.au […]

Ah yes, so, so true….I’ve always said “you can have any title you want; but can you live up to it?”…and if they have to proclaim themselves “guru’s” well then that’s the first clue…