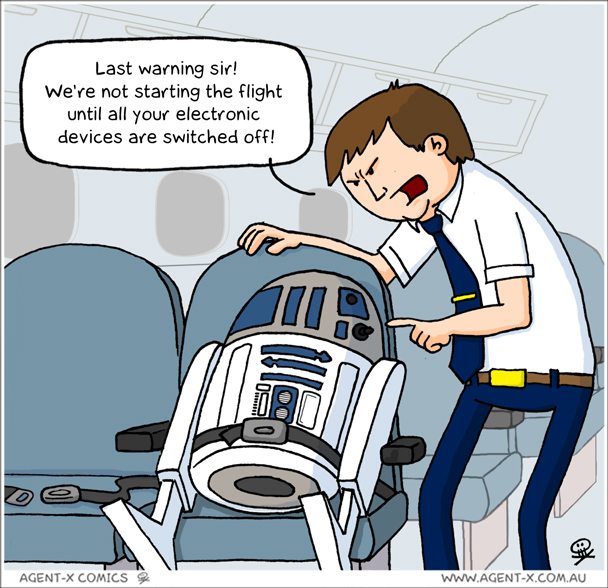 Poor R2D2 is never going to build up his frequent-flyer points by flying commercial airlines.

Anyone who has flown has been through the experience of having to turn off their phone or iPod during Takeoff and Landings.
Despite what many people think, this is not really due to the devices interfering with the aircraft’s instruments.
Actually, the main reason is so that you will pay attention when the flight attendants give their safety announcement.

Modern aircraft have all been updated to be able to handle the impact of other electronic devices being active on board, these days.
So, for the most part, leaving your smartphone on will not cause the plane to crash.
Although, it COULD still happen, so why risk it?

What I don’t get is why the flight attendants ask you to raise the window shades before landing.
Why?  Does the pilot need to be able to see out the windows to land the plane?
If so, then I am seriously misinformed about how pilots fly aircraft.

Actually, the window shades are raised so that the plane is filled with natural light in addition to the lights in the cabin so that if there is an emergency disembarking people don’t stand at the exit and squint into the light and hold up the evacuation whilst their eyes get used to the bright light. 🙂

That’s in addition to the response to the old style plane hijacking. The stuff of the 80’s when hijackers would hold the plane when it was on the ground and demand this or that. Shades up = visibility into the plane and everything is normal. Shades down = there’s some trouble there.

They need the window shades open in case there’s an incident during landing, so that emergency crews can see into the cabin if there’s a fire and choose the best course of action.

Regarding raising the window shades, it’s for flight attendants to see the sides of aircraft in case of emergency

Another one that I don’t quite understand is why the cabin lights have to be dimmed during take-off at night.

If a smartphone could bring down a plane we wouldn’t be able to take them on board. They would be an amazing weapon for terrorists.
As has been previously stated, the windows thing, and presumably the cabin lights thing is to allow our eyes to adjust to ambient conditions in case of a stuff up in the most dangerous part of a flight (take-off/landing) requiring evacuation and so ground crews have the best view inside the plane.