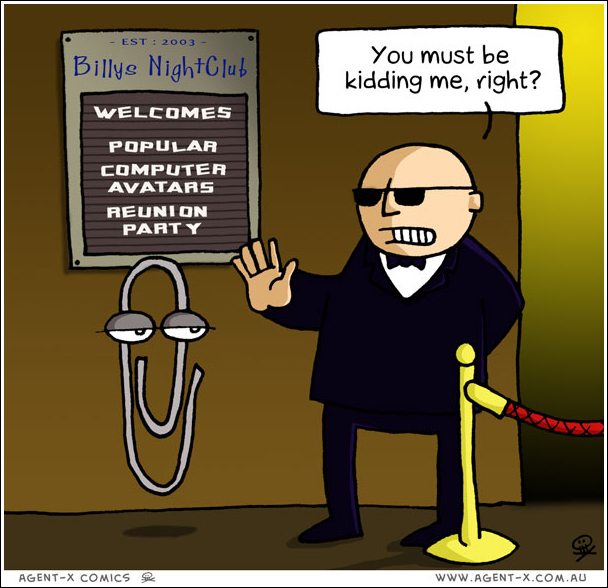 Is Microsoft’s clippy the most hated animated avatar of all time?

I think he just may be. I don’t know of any other avatar characters that seem to have united computer users in the bonds of hate like Clippy has managed to do.

Originally intended to be a helpful assistant to guide you through using Microsoft Office, he instead became a target of hatred.
I blame this on his arrogant manner. It always felt like he thought he was better than you and was putting you down. (Maybe that was just me?)

He is (mostly) gone now, but I know how much time microsoft put into creating him, so I truly expect him back sometime in the future. Until then – let’s enjoy the silence….

Leave a comment and let me know who your most hated avatar character is, and why.

Before you go – please take a minute to visit this excellent little animation done by Shaun Moriarty.
I just had to share this with you, as I think the animation he has done for this song is just perfect.

>> Click here to enjoy “a social network for two”

He was just like a cop. Always bugging you when you don’t want him around but the second you need him, he is no where to be found.

AHAHAHAHAH XDDDD
I WOULD TOTALLY INVITE CLIPPY TO MY PARTIES! LOL

we must remember his good qualities! such as his ability to turn into cool crap! like a bike! and…..i forgot! (its been a while since i’ve used that Word….)

Wha?? He turned into a bike?
I don’t remember that happening.
Can anyone confirm this with a picture?

I couldn’t find any pic, but I can support those words. Clippy would transform into a lot of shit, a bike included He was still annoying as fuck, though.

I found a funny picture!
http://gmftp.paranoia-live.net/Adam/clippy.gif

Yeah, I remember him doing that, I think it was when you asked him to leave or something along those lines.