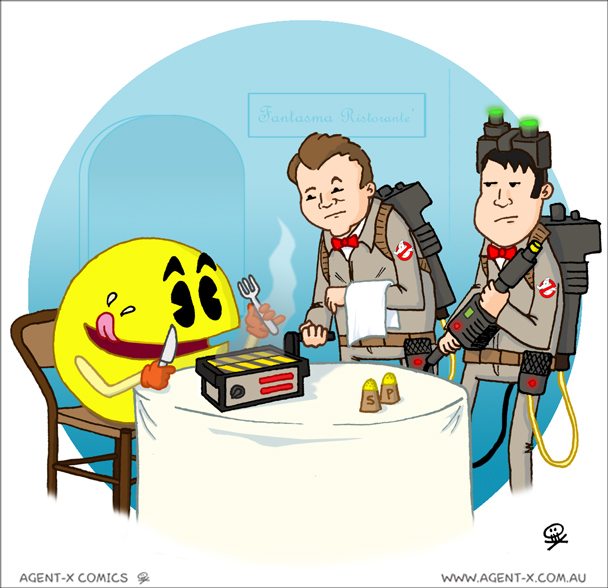 Between Pac Man and the Ghostbusters, there should be no ghosts left anywhere on earth.
According to my calculations*, a partnership between these two forces for good, would wipe out all ghost activity on the planet earth in 12 weeks, 3 days and 10hours.

Ok, so I am very aware that this is the third Pac Man comic I have done (and the second within 2 weeks of each other).
I just like the little guy so much!
But I vow to you all, that I will take a break  from using Paccy in a comic again for a while. Of course, the length of time that this vow lasts for is totally open to my own whims.

In case this is your first time here, the previous Pac Man comics are:

On a personal note, I am pretty happy with how this comic has turned out. I spent a LOT of time messing with the layout, trying to get this to work. I hope you like it too.

*Calculations may be totally made up, but you can’t prove a thing!!

I have a major fanboy crush on the original TV show “Monkey Magic”. It is one of the shows I grew up watching and it is still one of my favourite programs to this day.

The show was unique for it’s time and has influenced countless books, cartoons, TV shows and artists. It was fun, thrilling and yet it still also taught you life lessons if you took the time to listen.

As well as Monkey Magic, I also like ghosts, so I decided it was time to combine these two things and see what eventuated.
The results can be seen here on my flickr site, where I have posted the full set of these Monkey Magic ghosts. Hopefully, you can tell who is who amongst this lot.
I will be releasing this as a limited edition print soon, so stay tuned to hear more about that. 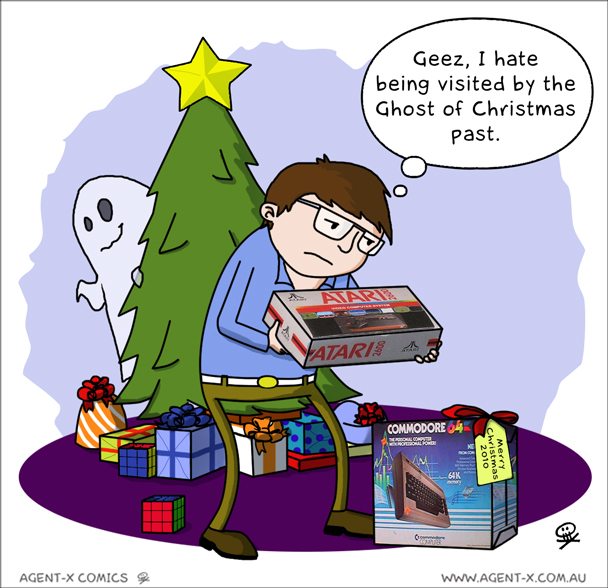 I was inspired to do this comic after seeing “A Christmas Carol” on TV, (played  too many times during Christmas Day), as well as the people moaning on twitter & facebook, about the crap presents they  recieved.

I imagined what it would be like if you got the Christmas presents you really wanted 15 or 20 years ago, but they only arrived today.
Even thought you really wanted them at the time, you would probably think they are the most crappy gifts ever now.
This is because advertising media tells you about a brand new something every day, that you really want, but did not know you wanted.

We all know that Christmas is a commercial holiday these days, just like Easter and Valentines Day.
Their original meanings are lost, obscured and obfuscated under piles of consumer messaging.

But if the thing you wanted was something that you REALLY wanted, you would still love it, even if it turned up many years later.
(Yes, I am thinking about you, Thundercats Electronic Cats Lair, and also you, GREEDO…. )

Personally, I really hate the pressure that I feel around the holidays. Specifically, the pressure to purchase gifts for others.
You are expected to get a little something for others (and a bigger something for your close family), regardless of your personal inclinations or budget restraints.
And when people say “I don’t want anything this year’ they very rarely mean it. Instead, they expect you to truly think about a great gift to give them. Trust me – If you take them at their word and don’t get a gift for them, prepare to go into hiding for the next 12 months.

Does anyone else feel the same way?

A christmas themed drawing, which was inspired by the classic tale “A Christmas Carol“, by Charles Dickens.
This is my updated version of one of the ghosts in the story.
He is totally full of “Holiday Spirit”, as well as “Holiday wine”, “Holiday beer”…… well, you get the picture.

This guy will visit you at christmas, drink all the booze and possibly leave you with a puddle of something that your truly hope is only ectoplasm, under the tree.

The Ghost of Christmas Pissed visits you to let you know that it is OK to have a couple of drinks at the work Christmas party or at your family gathering.

So, why not print this out and give it to your friends, to share the Holiday Cheer!
Let them know that they can cut loose& have a little fun at this time of year.
To print it, click here