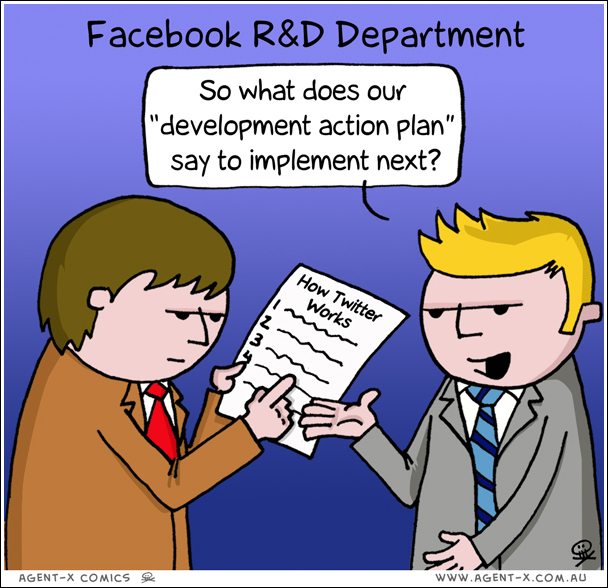 Lately, facebook has been implementing new features, which look suspiciously like functions that already appear in a very popular micro-blogging platform.
And the response to these implementations have not been received with the overly positive response that was perhaps expected.

Many people have blogged and suggested that Facebook has merely copied popular elements of other popular sites in an effort to make sure that current FB users remain with the site, as well as attracting users from the other sites to fall back in love with Facebook again.

Whatever the reasons – the main question that I think needs to be asked is this:

“Are Facebook making changes because it will enhance their user experience, or is it just a case of jealousy?”

Change for change sake is never good.
Time will have to tell with this one.

Regardless of what they’re doing I can tell you it’s not dramatically altering my user experience. That’s for damn sure. They need to work on making it easier to manage posted content. Managing photos for instance, or even getting to the upload screen, or the area where you can view your albums requires far too many clicks. The NewsFeed is great and all, but that’s not all a social site is supposed to be about.

I think the real problem is that Facebook is trying too hard to be something it’s not. Social sites like Facebook are about retaining information, like a repository, that family and friends can peruse at leisure. Twitter on the other hand is all about what’s happening, but what’s happening right now.

They’re two very different things and should be treated as such, because both have their merits and shouldn’t try to copy each other. Not that Twitter is doing any copying from Facebook that is.

What they both have problems with is search functions to find new friends/people to followl.