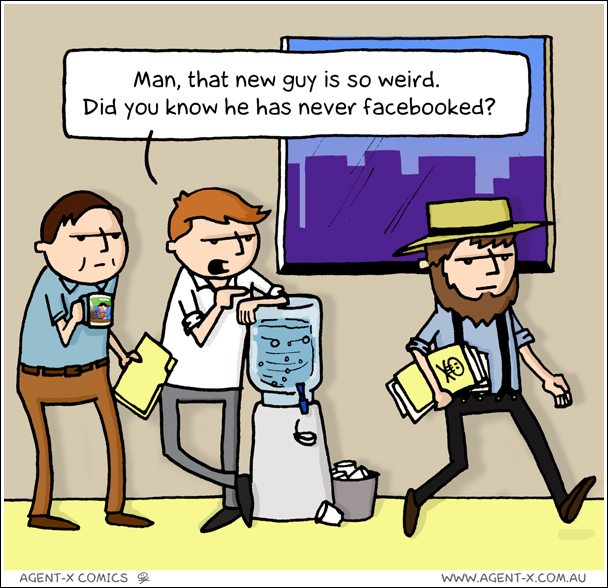 Do you also find it amazing that some people still do not use facebook?

Isn’t there a law or something, that says everyone should be using some form of social media by now?

I am from an age group that watched the internet get born & flourish. I had no twitter, facebook, identica, myspace, bebo, etc when I was younger.

Heck, I even remember playing computer games on a black & green screen that were run from data on a cassette tape!

I recall showing my friends “PONG” and they were astounded.

There was even the time that I was king of the school for about a month, when I got a handheld Donkey Kong Jr game that had 3 – count ’em – 3 screens!

Now, even after growing up through all of the electronics progresses of the 80’s to now, I am sometimes very surprised to learn that someone is NOT using twitter, facebook, etc.

I am not alone in this. The younger generation just expect that people are using the same online tools as themselves.

People who don’t, get shunned in the same way that when I was young, you got shunned for still playing Pacman on a tabletop machine rather than a handheld device.

It is amazing how quickly we are accepting of new services & technology, and just think of them as “the norm”.

I wonder how long it will be now, until we laugh at people for using twitter or emial, rather than Google Wave??

Wow! How do you find out what he’s thinking?

Apparently the Amish use some weird thing called “conversation” and “speaking” to explain what they are thinking. Very strange.

Maybe he doesn’t have any friends to add?

Maybe he hasn’t even used twitter?!
How would he then let everyone know that the cow thinks his hands are cold, or when he’s eating a sandwich or that the sandwich was delicious or terrible and what if he drops the kids off and they just splatter all over the place, how would he then take a shot and post it for everyone to see? he’s missing out.

I want to see him live tweet a barnraising.
At least when he plays Farmville, it is for real….

Geez, I was playing Tomb Raider before Angelina Jolie was born,Tennis when the racket was a vertical line that just went up and down and went beyonk, Tetris on a B&W Gameboy and Mortal Kombat on Sega Mega Drive. Oooh yeah! Now I am on Facebook, MySpace, StumbleUpon, Twitter, Technorati, WordPress, MSN, and Squidoo 🙁 . One day I might actually walk outside !!!!!!

Don’t do it. I have been there and it was a vapid wasteland where i was forced to speak the things I was thinking. Also, apparently they also call following “stalking”. Just strange.

I have seen what Facebook does to people. That is enough. 😉

Yes, facebook does really weird things to people.
I think it sucks out your common sense.

I actually don’t use any social media myself. I just talk to people in person or on the phone