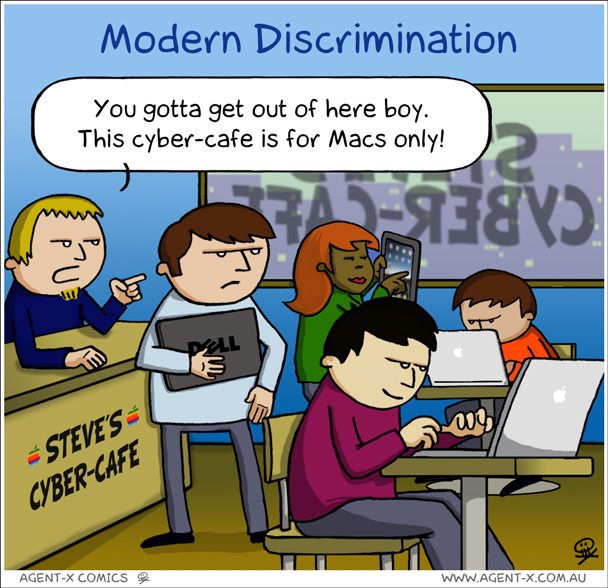 What side will you be on when this happens?

Take a look around and you will see the signs of the segregation that is coming. People are picking a side and defending their chosen brand with conviction and a semi-accurate knowledge of the systems inner workings.

If we are not careful, there will soon be whole sections of cities where certain technology manufacturers are totally banned.
Teenagers will meet in secret rooms to look at the “forbidden” systems not allowed by their parents.
And the world will be a shittier place…….

Why can’t we just have one unified platform that all manufacturers use, and live in harmony for ever more?

Is Microsoft’s clippy the most hated animated avatar of all time?

I think he just may be. I don’t know of any other avatar characters that seem to have united computer users in the bonds of hate like Clippy has managed to do.

Originally intended to be a helpful assistant to guide you through using Microsoft Office, he instead became a target of hatred.
I blame this on his arrogant manner. It always felt like he thought he was better than you and was putting you down. (Maybe that was just me?)

He is (mostly) gone now, but I know how much time microsoft put into creating him, so I truly expect him back sometime in the future. Until then – let’s enjoy the silence….

Leave a comment and let me know who your most hated avatar character is, and why.

Before you go – please take a minute to visit this excellent little animation done by Shaun Moriarty.
I just had to share this with you, as I think the animation he has done for this song is just perfect.

>> Click here to enjoy “a social network for two”