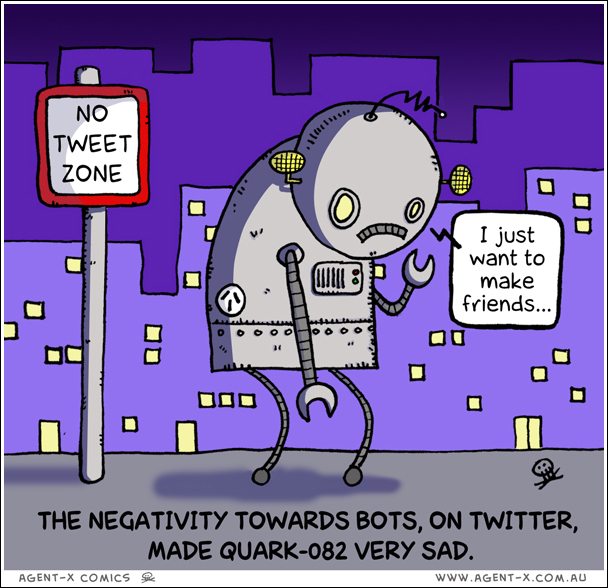 Bots are, on the whole, viewed as BAD, by twitter users, and are a major source of frustration. They can be annoying and difficult to get rid of once they latch on to you. Many users even have bots as followers without even realising it.

There are many types of bots thouhg, both good and bad.
Spam bots are bad, normally get picked up pretty quickly & blocked by the users they target.

Others are seen as “good” bots, which perform helpful functions, such as sending you back information when you request it. Examples of this are gCal (TwitterCal) and Remember The Milk – (Add & receive to your to do list).

Bots in twitter, and on the internet in general, are far more prevalent than many users actually realise.
In July, 2009, Sysomos created the  “Inside Twitter” study, which concluded that in total, 24% of Tweets are created by bots. That is a lot of activity by non-humans.

There is even a site called It’s a bot that monitors twitter, and informs us if they find a bad bot.
The site states that they are likely to think you are a bot if you …

– spew out random rubbish
– aren’t involved in the conversation
– more interested in shouting rather than listening.

Umm… I have REAL followers like that, so maybe they are bots?

So, all of this got me thinking of a few things…..

In the case that either of the two points above come true, I want to stay on the good side of the bots.
I do not fear the bots (yes, I do!) and I want to be your friend. (Please spare me when you destroy all humans.)

Most bots don’t bother me. Spam ones do. And the ones that chide me for swearing, I hate those. Follow Friday ones get the block treatment, just cos I think they do generate more spam than anything else.

Retweet bots however, are AWESOME. It’s great to have my tweets go even further, even if it is by a bot. Sometimes people follow those bots just to pick up on interesting people and info to follow, so the bots serve a purpose.

I dated a bot once and all he wanted to do was play with my tweets!

OK – It’s a shame that the Laser Rifles are out of stock until 2095. With that being the case, could we perhaps substitute Scud Missile Launchers?

Maybe, we could REALLY do some damage to the bots with simple water pistols. Squirt ’em – they would get rusty and seize up. Less noise and less mess.