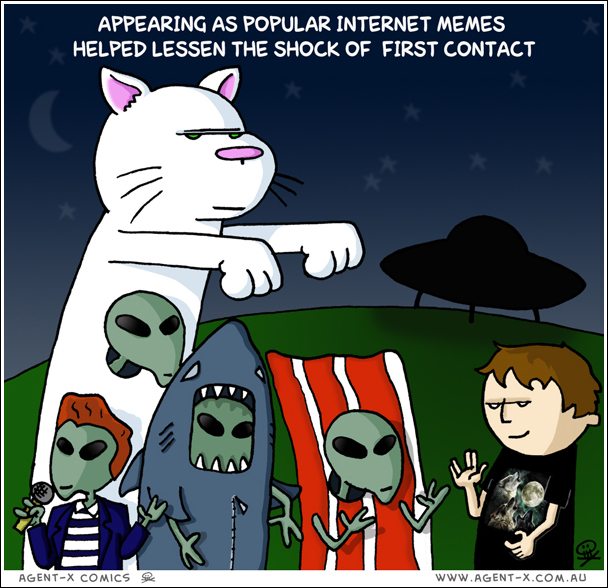 If aliens landed tomorrow, what would they have to do to avoid scaring us to death?

Ok, sure, we have all seen so many sci-fi shows and movies, that I am sure many of us would handle it fairly well.

But how would the aliens choose to deal with it?
Would they just come right out and show themselves as they are, or choose to take a more subtle route?

This comic shows one possible scenario that aliens may choose to follow, in order to lessen the shock of First Contact. Plus, I had a strange desire to draw an alien dressed as bacon.

Recently, I have done a couple of Tweeterviews, which are interviews via twitter.
This was achieved via a new service called  Tweeterview, which I encourage you to check out. It is a free service.

The victims subjects of these Tweeterviews were Lonnie Easterling who creates Spud Comics, as well as Brian Anderson who is the creator of cartoon Dog Eat Doug.

Brian and I spoke about
“Promoting webcomics with social media” .
To view the published tweeterview, click here

You are obviously a master of high level memes. I bow down to you.

It’s no different when someone reveals themself from behind their gravatar….damn scary if you ask me!

It is so lucky that you actually look like a tse-tse fly, isn’t it?