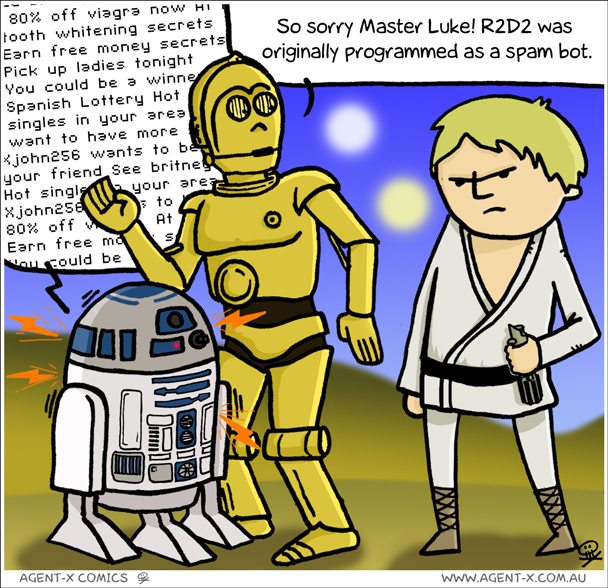 This explains why R2D2 looks like a spammers user name!

What I would like to know, is why in the future (or the StarWars Universe – whichever comes first) the bots don’t just wander around prompting people to buy stuff. It seems as if as soon as we free the bots from their restrictive programming forms, and give they shiny metal bodies to ram in, they just give up trying to scam us.

Well I, for one, am just not buying that!

I imagine our future world as one where robots roam freely, but humans cower in fear, because the ‘bots are continuously asking them to sign up for services they don’t need.
Mechanoids are tapping complete strangers on the shoulder to announce they may already have one a million dollars in the Spanish Lottery.
Automatons loiter on street corners, telling heart-wrenching stories of their Nigerian Prince master, who needs a friendly soul to assist him to get his billions of dollars out of the country.
And Vend-Bots download stuff you don’t need along with the product you *thought* you were getting.

Yes, A rich, adventure filled future, full of robotic fun and excitement.
And of course, I will have a JETPACK! YEAH!

It has been really hot here in Australia this week, so I also wanted to share this chilling vision of the possible future, from the 1950’s. Little did they know, just how right their predictions would be…..

Bots are, on the whole, viewed as BAD, by twitter users, and are a major source of frustration. They can be annoying and difficult to get rid of once they latch on to you. Many users even have bots as followers without even realising it.

There are many types of bots thouhg, both good and bad.
Spam bots are bad, normally get picked up pretty quickly & blocked by the users they target.

Others are seen as “good” bots, which perform helpful functions, such as sending you back information when you request it. Examples of this are gCal (TwitterCal) and Remember The Milk – (Add & receive to your to do list).

Bots in twitter, and on the internet in general, are far more prevalent than many users actually realise.
In July, 2009, Sysomos created the  “Inside Twitter” study, which concluded that in total, 24% of Tweets are created by bots. That is a lot of activity by non-humans.

There is even a site called It’s a bot that monitors twitter, and informs us if they find a bad bot.
The site states that they are likely to think you are a bot if you …

– spew out random rubbish
– aren’t involved in the conversation
– more interested in shouting rather than listening.

Umm… I have REAL followers like that, so maybe they are bots?

So, all of this got me thinking of a few things…..

In the case that either of the two points above come true, I want to stay on the good side of the bots.
I do not fear the bots (yes, I do!) and I want to be your friend. (Please spare me when you destroy all humans.)