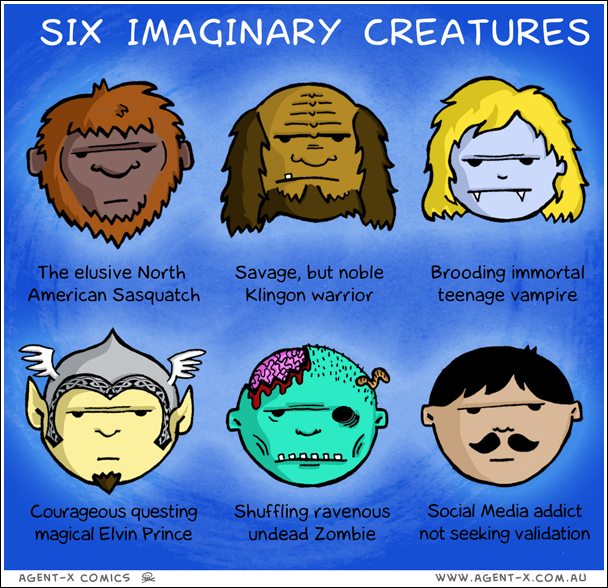 Sure, these creatures may be based in fact somewhere. But also possibly, they are not.

As exhibit A, I present to you “KLINGONS”.

We are totally aware that the Klingon race is nothing more than characters dreamt up by the writers of STAR TREK,to allow for a protagonist alien culture for the good guys to overcome.

But now, after more than a quarter-century of the Star Trek phenomenon, a mythos has permeated popular culture which has seen the Klingon’s gain a language, back history, culture and folkloric stories.

At some point in the distant future, it is feasible that the belief in the Klingons becomes so ingrained, that the knowledge of who they came to be is lost to us. They will then be mythical creatures that we know a lot about but no-one has ever seen for real. (Or if they have, no-one has lived to tell about it!).

Does any of that scenario sound impossible, or very different from how we now view creatures and monsters of myth & folklore?

I am not saying that anyone should stop believing in what they want to.
On the contrary – I want someone to believe so hard that they actually prove the existence of a mythical creature.

Because I really want to ride a unicorn. Preferably dressed like robocop at the time….

[…] This post was recently mentioned on Twitter by agent_x (http://twitter.com/agent_x), who said: Want to see six things that don't exist? They are in my new comic. http://bit.ly/2qzS9N Pls RT if you like it. […]

Perhaps the title of this comic should be Six Legendary Creatures. Cos a Spoonerist is totes a legend.

Yes, Spoonerist is a bit of a legend. But I don’t think he has a real moustache…..

Love the Zombie and Vampire! Is that supposed to be Hitler? That’s hilarious!

Thanks! I personally like the Zombie & the Sasquatch, myself.

The Social media user is supposed to just be a person. Not Hitler.
But it seems it must have look-a-likes in real life.

This post was mentioned on Twitter by mingyeow: Six imaginary creatures (do you see yourself there?) http://tr.im/zyFr…