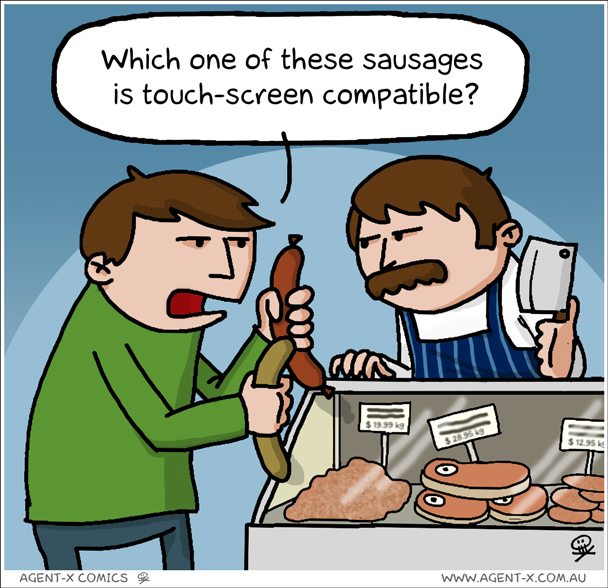 Please ensure you always check your meat to make sure you get the full use out of it.

In case you are not aware of the practice, the comic above refers to the fad of using  a Meat Stylus on iPhone & iPad screens.
As these devices have a display that needs conductivity to work, using something like a pen,etc,will not let you use the interface.

Many savvy users quickly figured out that they could use sausages on their touch screens as a stylus,and have it work successfully.
The sausage conducts the bio-electric current and allows the screen to be used without actually touching it with your fingers.

The trend appears to have begun in South Korea when users wanted a solution to using their phones in the winter.
Apparently snack sausages were found to be electrostatically compatible with the iPhone’s capacitive touchscreen, leading many to use them as a “meat stylus” in the cold weather, rather than remove a glove.
And it’s not just a joke – apparently South Korean snack sausage sales soared.

One of the side benefits of this is that the users get to keep their screens fingerprint free, as well as having a tasty snack to use after a hard session of “Angry birds” or “Cut the Rope“.

Did you know superman has an iPad too?

Yep, even he can’t resist the urge to get on board the bandwagon and be one of the normal people.
Too bad he got over zealous and downloaded the “Phantom Zone” app.

Now his iPad is filled with low life Kryptonian scum.

Damn you General Zod, Ursa and Non!
Can’t you just leave good old Supes alone?
All he want’s to do is kick back in the fortress of solitude with his ipad and enjoy the……umm….solitude. 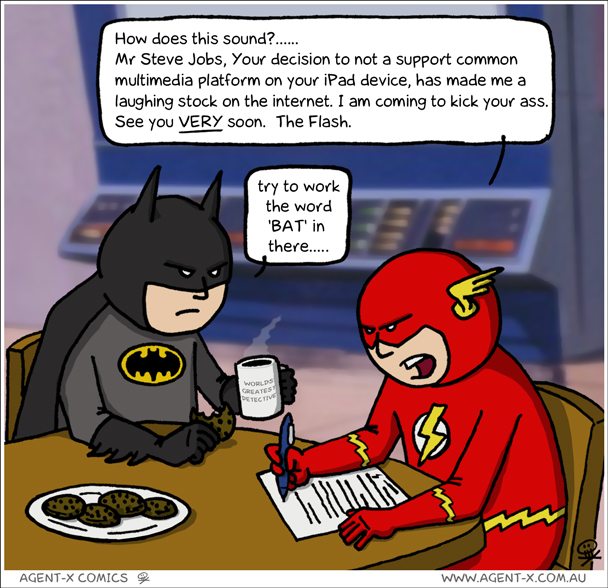 There has been a lot of talk on the Interwebz about the lack of support for Flash on the iPad. We all came to accept it missing from the iPhone, but expectations were high that the fabled iPad would support it. But not so.

And due to this, there have been numerous jokes made about it online.
Obviously, I have thrown my hat into the ring with the comic above. But there have been many other great ones also created over the past few weeks.

Two of my favourites are:

Apple has said all along it didn’t believe Flash was a good mobile technology and resisted supporting it since the first iPhone was released.
They prefer HTML5, CSS, JavaScript, and H.264 (all supported by the iPhone and iPad) that are open and standard, while branding Adobe’s Flash to be closed and proprietary.

But despite the Apple openly not supporting Flash on their mobile products without a reason, Adobe spent a lot of time to rectify the situation at there end.
Adobe Systems put in the effort to change its technology, and prepared solutions for building Flash applications that run on the iPhone.

Then Apple changed the terms of its iPhone 4.0 software developer kit license, which effectively blocked Adobe’s move, meaning that Adobe ceased future development of the Flash-apps-on-iPhone technology.
The result of all this is an Apple-Adobe battle of which I, for one, will be keen to see the outcome.

Looking for a cool new online comics to read?
Well you are in luck, because I have two to recommend to you today! I really like the art in these comics and I hope you do to.

Go now, and check out: